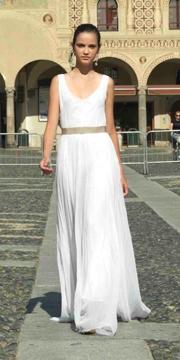 Elise Gug is a contemporary designer offering luxurious, ready-to-wear salon dresses, wedding dresses, and accessories for women.Her fashion is sold and worn around the world, so a visit to one of the main stores in Copenhagen is a must for anyone interested in high-class fashion.

Elise Gug's trademarks are beautiful and elegant designs, the finest materials, and exquisite craftsmanship. Her designs are always feminine, with an eye on modern trends without being constrained by them. The collections are made in Italy, where she has a studio.

Elise Gug has received numerous awards, including two of the most prestigious; in 1990 she was awarded the Golden Button as Best Danish Designer, and in 1997 she received the Blue Thimble as Copenhagen's best designer. She is one of only three Danish designers to receive both awards.

Elise Gug started her brand in 1986 alongside her husband, Niels Erik Garde Kongshaug. The brand has gone from strength to strength and is now sold in luxury shops worldwide. Before starting the Elise Gug brand, she had worked as a freelance designer for various Danish fashion houses, having graduated from the Danish Design School in 1982.

She is inspired by timeless style icons like Grace Kelly, Jackie Kennedy and Audrey Hepburn. Her fascination with design extends into interior design, and her stunning home in Copenhagen has been featured in numerous worldwide magazines and books.

There are many branches so contact the stores via the website first to discover the closest to you.