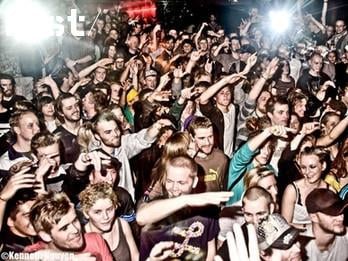 Rust has a long history in Copenhagen's nightlife. Situated in Nørrebro, close to the city centre, it was born in 1989 and has been providing a welcome respite for clubbers who like their clubs --and their live music--to be a little left of centre, something different from the mainstream.

Rust has the capacity for almost 700 clubbers over three floors but still maintains an easy-going, intimate vibe.

Four nights a week Rust provides Copenhagen's discerning clubbers with music and atmosphere spun by local and international DJs. Admission is usually DKK 60 but may be higher if a big name international DJ is booked. But, on Thursdays, you can get in for just DKK 30.

On Wednesday nights, it's 'Heat', all about underground hip hop, funk, break dancing, street art etc. with live acts and showcases. A very interactive night. Thursdays Rust has three live acts on the main stage, usually indie rock, with a DJ downstairs spinning electro, techno and house. Fridays and Saturdays are given over to Rust Nightclub itself, serving up an eclectic mix of the best Danish rock, house and electro DJs. There are also late night concerts that start at 01:00. Check the website for details.

Rust has had some big name bands treading their stage at one point or another, from Bloc Party to The Stereo MCs. Rust helps nurture new talent, mostly from the alternative and non-mainstream fields of hip hop, indie and electronic.

Rust is a good night out for serious clubbers and alternative music aficionados.