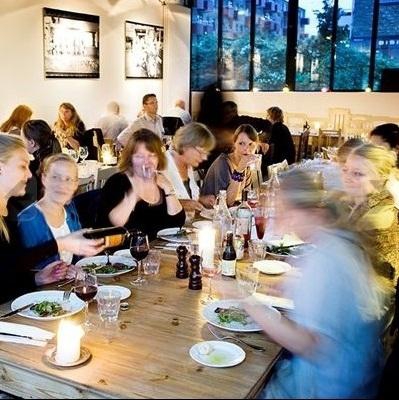 Inspired by the raw and fashionable atmosphere of the streets of New York, in particular of course the Tribeca area, Tribeca NV is an Italian trattoria restaurant that offers simple and delicious twists on Italian cuisine.

Tribeca in New York actually stands for 'Triangle Below Canal Street', which refers to the area's location in the city. It was originally one of the city's largest industrial estates, and many old industrial buildings--now filled with art galleries, boutiques or restaurants--still stand from the time when manufacturing companies were still found in central New York. In the 1960s and 1970s, young New York artists and their families moved into these abandoned warehouses to make their homes and galleries. Gradually the identity of the neighborhood began to change and in came modern apartments and businesses. The neighborhood still retained its character, though.Nowadays, Tribeca is one of the most popular places to live in New York, with parks, galleries and restaurants in high demand.

The owners of Tribeca NV feel that the Copenhagen NV area is in a similar period of transformation; the rough diamond of Copenhagen. Like Tribeca in New York, it is traditionally an industrial area and the remnants of that are still very visible. Now there are small companies working from warehouses alongside modern blocks of flats as urbanites make their home here.

The district also has a lively feeling of involvement from local citizens, with community projects and building projects. Tribeca NV hopes to be a part of that, helping put Copenhagen NV on the map. The interior is very stylish and modern, and there is an outside seating area for the warmer days.

From the a la carte menu, try the Manhattan Clam Chowder to start (DKK 85) followed by the Grilled beef fillet with braised trevisosalat, mild chili butter and thyme potato (DKK 175), and why not round up with cheese and dessert.